I expected these days in isolation to drag on forever, but I’m finding that they are whizzing by faster that ever. May is almost over. My series is almost complete! I’m grateful to members of the youth lit community who were eager to proclaim their anti-racism while supporting Asian, Asian American and Pacific Islanders this month. The calendar filled quickly with many people unable to get a slot. Others never saw or never received an invitation to join in, but they would have.

I have just a couple more videos to post this week. I decided that the best way to end this month would be to give space to Asian Americans who work in children’s literature. May is ending soon and it’s also ending strong!

We start today with an essay from my dear friend, Paula Yoo who writes about Vincent Chin and the Asian American civil rights movement.

American community in Detroit at the time. He was engaged to be married the next week. He was out with his best friends for a bachelor party. A fight broke out with strangers at a club, and two white men beat him to death with a baseball bat.

In March 1983, these same two men pled guilty to manslaughter. The verdict? Guilty. The sentence? Three years probation and a $3000 fine each plus court fees.

This lenient sentence woke up not only the Chinese American community but also Asian Americans across the country. They fought back for “Justice for Vincent Chin.”

This would lead to the first civil rights trial for an Asian American in 1984. Although the 1984 verdict of “Guilty” was later overturned to “Not Guilty” in 1986 due to an appeal, Vincent Chin became a civil rights symbol for Asian America.

Fast forward 37 years later to March 11, 2020, when the World Health Organization (WHO) officially declared COVID-19 as a global pandemic. Even though this viral disease affected everyone, many people, including prominent politicians, began pointing the finger at China. For a brief time, President Donald Trump even insisted on referring publicly to the coronavirus as the “Chinese virus” even though experts condemned that phrase as racist.

As a result, Americans of Asian descent became targets of racism and violence. They reported experiencing verbal and physical abuse related to the pandemic. Almost 40 years later, Vincent Chin’s name was being mentioned again in the media as a warning.

Other politicians joined in, including Former First Lady, Secretary of State and United States Senator Hillary Clinton, who criticized Trump for his “racist rhetoric.” Joseph Biden, former Vice President and presumptive Democratic nominee for President in the 2020 election, said the term was “xenophobic fear-mongering.”

Since March 2020, more than 30 percent of Americans have reported witnessing coronavirus-related harassment and/or hate crimes against Asian Americans according to the Center for Public Integrity. Other Asian American Pacific Islanders hate crime trackers including the “Stop AAPI Hate” tracker by the Asian Pacific Policy & Planning Council have reported receiving almost 1,500 reports of racist incidents linked to the pandemic since March 2020.

Congresswoman Chu urged fellow politicians and leaders to “… help us prevent hysteria, ignorant attacks, and racist assaults that have been fueled by misinformation pertaining to the 2019 novel coronavirus (COVID-19).”

My next book is a Young Adult narrative non-fiction book about the Vincent Chin civil rights trial and how it galvanized the Asian American movement. It will be published by Norton Young Readers (W.W. Norton & Co.) this Spring 2021.

It was an honor to tell Vincent’s story. Given the recent spike in anti-Asian racism not only in our country but all over the world due to the coronavirus pandemic, Vincent’s story is still relevant today. We must honor his name and his legacy — he reminds us that we must never be complacent and always fight back against hate and injustice.

Paula Yoo is a children’s picture book author and novelist. Her debut YA narrative non-fiction book about VINCENT CHIN, a Chinese American whose beating death at the hands of two white autoworkers in Detroit in 1982 galvanized the Asian-American civil rights 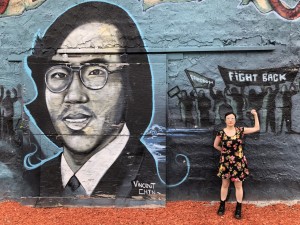