The Arrival by Shaun Tan (Lothian Books, 2007) By Jennifer Baker 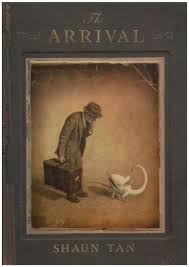 I recognize in the States it’s AAPI (Asian American/Pacific Islander) Heritage Month. And as a head’s up to readers, the work I’m spotlighting was created by Shaun Tan, an Asian Australian artist. For me, The Arrival really does convey a gripping and completely engrossing experience when it comes to migration, something that many people of many backgrounds can relate to. The migration story is one where Asian Americans & Pacific Islanders can be relegated to by a white dominant gaze, particularly in books. The perspectives of change, pursuit, difference are necessary, yet “otherness” as a core attribute for BIPOC communities, and especially for Asian American/Pacific Islanders, can be overdone and unnecessarily tragic. The Arrival is one of those stories created by an artist of Asian descent that is universal in its execution and message. The endpapers of The Arrival showcase the faces of those immigrating, and they are not a monolithic background—the 120 pocket-sized illustrations display a wide range of skin tones, facial structures, clothing, and expressions. Many of them are similar to the blank/reticent stare in a passport photo.

In his author’s note Tan mentions this graphic novel (or chapter book depending on who does the categorization) was inspired by a collection of migrant stories including that of his father “who came to Western Australia from Malaysia in 1960.” Reading, or more accurately reacting, to a book such as The Arrival brings to mind many of the ways immigration has been frowned upon, limited, or completely negated by the (white) powers that be in the U.S. Think the Chinese Exclusion Act and the Emergency Quotas Act of 1921 that led to the more rigid Immigration Act of 1924. These were laws specifically created to restrict Asian, Pacific Islanders, and Latinx communities. It makes me think of how white Europeans were granted the grace of “good character” to gain access to this country while BIPOC were limited from profit and gain as soon as they stepped foot on land. While The Arrival is not a book that focuses on those types of exclusions, the focal point remains the immigrant experience, the fear of leaving and the fear of staying. The Arrival captures, with no words whatsoever—yes, it is a wordless graphic novel/picture book—the inability to communicate; the processing of people in lines that snake around piers; the confusion, disorientation, and hope of those seeking something better. The promise of a place safer than the one they left. It’s not a singular story. The main character’s journey to settle down before his wife and child can join him are shared by others. Kindness offered the protagonist comes in the stories of those who can relate having left dank and creepy spaces where threats were often in shadow. While everyone’s circumstances differ, the unifier is their quest for something so much brighter even if the first steps to flee were scary. In each panel and spread Tan captures every quirk of an eyebrow, stretch of the smile, uncertain shrug, and kind gesture—often a finger point accompanied by said smile.

From the front cover to the interior pages to the barcode the resemblance to a photo album passed down from generation to generation fulfills the emotional journey of feeling something so exquisite and so personal, it’s truly a perfect book for someone at any age. But it strikes me as even more potent for younger readers. The feelings Tan captures are so evident and so pure, the extraction of text for those who can take in the display provides even more emotional depth because we can put ourselves right in that moment.

Tan said it took about 4-5 years for him to complete this book, all illustrations, all sepia tones. In The Arrival Tan allows the empathy of the protagonist’s journey to sit with us in each page, for you to find something new in every stroke and corner, to see a part of his family lineage and others’ too. The story doesn’t end tragically, it ends with kindness shown to new arrivals. This is the most pertinent thing we should remember when it comes to any migration story.

fixture in the book business.”She currently works as a managing editor, is a contributing editor to Electric Literature, and is the creator and host of the podcast Minorities in Publishing. Jennifer is the editor of Everyday People: The Color of Life—A Short Story Anthology with Atria Books, an imprint of Simon & Schuster. Her short story “The Pursuit of Happiness” was nominated for a Pushcart Prize for 2017 by Newtown Literary Journal.  In December 2013, her young adult manuscript, The Facility, won the SCBWI On-the-Verge Emerging Voices Award for underrepresented voices in children’s literature.