Tae Keller grew up in Honolulu, Hawaii, where she danced hula and subsisted on

kimchi and spam musubis. Now, she writes about biracial girls trying to find their voices, and lives in New York City. When You Trap A Tiger is her second middle grade novel.

When Lily and her family move in with her sick grandmother, a magical tiger straight out of her halmoni’s Korean folktales arrives, prompting Lily to unravel a secret family history. Long, long ago, Halmoni stole something from the tigers. Now they want it back. And when one of the tigers approaches Lily with a deal–return what her grandmother stole in exchange for Halmoni’s health–Lily is tempted to agree. But deals with tigers are never what they seem! With the help of her sister and her new friend Ricky, Lily must find her voice…and the courage to face a tiger. 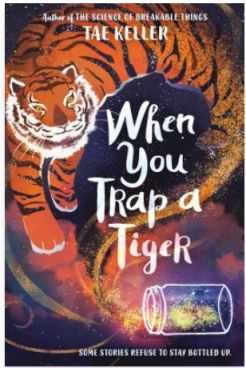 “Roars to life with just a touch of magic.” Kirkus Reviews, Starred Review

“If stories were written in the stars … this wondrous tale would be one of the brightest.” Booklist, Starred Review

“This deeply moving book is a must-purchase for all collections, showcasing vulnerable and mythic storytelling.”  School Library Journal, Starred Review

“A…satisfying story, one that foregrounds family and healing alongside a love for Korean folklore.” The Bulletin, Starred Review

Kyle Lukoff is the author of books that include When Aidan Became A Brother (Lee & Low, 2019) and Explosion at the Poem Factory (Groundwood, 2020). While becoming a writer he worked first for ten years as a bookseller and then worked for nine years as a school librarian. He lives in New York City, and hopes you’re having a nice day.