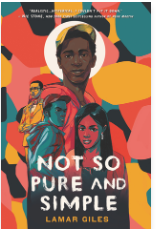 Del (Black, able bodied, cishet male)  seems like such a nice guy. He goes to church with his mom. (Because he wants to keep driving his car.) He holds down a job. (Again, because he wants to keep driving his car.) And, he “tutors” his friend, Shianne, who’s behind in her schoolwork after just having a baby. (Her dad pays him for the “tutoring sessions”, and this provides gas money for his car.) Don’t get me wrong, this car isn’t the main thing on Del’s mind: it’s Kiera. She goes to his church. AND, she just walked up to the sanctuary to join the Purity Pledge, and so does Del.

Lamar Giles has a solid reputation as African American man who writes young adult fiction. In this, his tenth published YA book, Del Rainey has liked Kiera Westing since kindergarten and now that she’s “available”, he’s willing to do whatever it takes to claim her. Notice that antiquated language? Therein lies Del’s problem.

This is definitely Del’s story, but through secondary characters like Shianne and Cressie (his sister), young woman’s voices are brought to the forefront. They tell their own story while naming the aggressions.

This is a story of toxic masculinity. Giles delivers this toxicity by letting it naturally occur in the story with no immediate pushback. Del enjoys viewing porn and various female body parts as if it is his right to do so. How gross it feels depends on the reader’s own level of awareness rather than that provided in the text. Del is unaware of his own ignorance throughout most of the book and the reader is allowed to dwell in Del’s perspective. But read the book with any level of awareness and Del’s crude, toxic behavior can’t be missed, even if he is a nice guy. When his behavior causes Del’s life to unravel, his consciousness begins to reform, freeing itself from the stray, misguided thoughts that were pulling Del apart.

I’ve thought about this book for weeks since I’ve finished it. Picked it back up, pieced through it and thought some more. I’ve analyzed it more than critiqued it with my thoughts straying in several different directions. I believe good stories given us a lot to think about.

I liked that Del’s problems were solved inside his family rather than among his friends. I think YA literature too often makes readers discount the value of guardians and relatives. There’s so much to considering regarding his relationship with his mother, father and sister all individually and collectively as they impact Del’s formation.

I think there were so many directions that this book could have gone… it could have dwelled on faith and belief, but Del never questioned that, nor did he ever really decide for himself when the right time is to have sex. He’s had so many examples of destructive relationships amongst his peers, yet he was able to stay free from judging them for their actions. His character developed when he came to understand the foundations of caring, trusting relationships. While Giles left room to explore Black male relationships, sexuality and toxicity, I think he left particular space to question the innocence of Black boys. Here, Giles explores the concept through virginity, a physical innocence with social and religious dimensions.

“I was … under the impression… that you weren’t exactly,” she did another glance toward the back, embarrassed to look me in the eye, pure?” [Mya speaking.]

Her voice sped up. “Not that I’m criticizing. But, I mean, don’t you have a sort of reputation?”

I had no response. I was still processing the Purity Pledge thing myself, and Mya Hanson was vetting my virginity? p. 27

Del wears clip on ties, respects his parents, goes to school, is loyal to his friends (male and female) and watches out for the younger member os the Purity Pledge. But, he’s a young Black man, no longer a Black boy. Innocent?  He watches porn, joins the Purity Pledge on false pretense and objectifies women. Can this young Black man be innocent? Isn’t he just doing the little things we all do? But, who is ‘we’, and do ‘we’ all have the same expectations? Consider the ways Del is judged at home, by his male friends and by his female friends, by his teachers and even by his church. Consider his oppressive treatment of women and how that may diminish his innocence, his lack of guilt.  Once lost, is innocence completely gone?

In my thoughts, I’ve compared this a lot to Full Disclosure (Camryn Garrett/Knopf, 2019), another book I’ve read recently and noticed that as progressive as both books are in terms of female identity and sexuality, both still assume the onus for initiating any type of cishet relationship falls on the guy. Here, the guys always initiated the relationship while in Garrett’s book, the guy was expected to initiate sex. An observation more than a criticism, teens don’t have to get it right in books more than they do in life. Yet, the consistency of that message communicates something to readers.

Which leads to my final thought: just how perfect do we expect marginalized authors in particular to write characters even though we don’t expect their characters to be perfect? I think Giles does it well (10th book, remember?). I think his characters are flawed, his situations imitate real life and at some point in the story, we get gobsmacked. A truth sneaks in that highlights all the imperfections. Giles is really good at not being so obvious in including the required Latinx or Asian, queer or disable character. All of his characters make meaningful contributions to the story and they’re presence isn’t announced in a way that makes them feel obligatory. But again, I think we hold marginalized writers to a higher standard here as if they’re supposed to know how to be inclusive when what this requires is a degree of writing proficiency and a level of cultural competency such as what Giles’ offers.

Well, my book has many pages with bent corners to which I didn’t refer and plenty good moments I didn’t share. This book is a good one. Yet, I worry about it in these days when librarians and teachers can lose their jobs for making books available that don’t meet community standards (whatever that means!). It raises important issues about how young Black men regard women; how Black boys lose their innocence and that compassion that is the foundation for our relationships.  It communicates ways to be responsible while it also realizes the depth of information that young people will want to have available. It’s a work of art that is responsible to its reader. Pay attention to the conversations in your communities. Read the book. Talk about it. Think about it.