I’ve invited non Black people who are in someway connected to youth literature to share a list of 5-10 books written or illustrated by Blacks that will appeal to children. I asked for anything from board books and graphic novels to biographies and adult crossover. The authors or illustrators could be living or dead, U.S. residents or not. Today’s guest is Deborah Menkart.

Deborah Menkart is the executive director of the education activist, non-profit organization Teaching for Change. She is the co-editor of Beyond Heroes and Holidays: A Practical Guide to K–12 Anti-Racist, Multicultural Education and Staff Development and Putting the Movement Back into Civil Rights Teaching and also co-director of the Zinn Education Project.

Thank you for this invitation to talk about books! Here are six of my favorite children’s picture books by African American authors. I have MANY more favorites, so please know that this list is only limited by my time, not by the number of additional titles I would love to add. Each one is by an author(s) who has written many books of note and each one addresses a particular issue in children’s literature, as I explain below. I don’t say anything about the illustrators in the annotations – however they are also of note and well worth following for their work.

Schomburg: The Man Who Built a Library by Carole Boston Weatherford and illustrated by Eric Velasquez. “Where is our historian to give us our side? To teach our people our own history?” asks Afro-Puerto Rican Arturo Schomburg on the first page of this 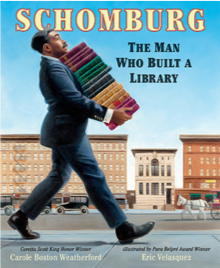 beautifully illustrated picture book. Schomburg’s 5th-grade teacher had told him “Africa’s sons and daughters had no history, no heroes worth noting.” The Schomburg Center for Research in Black Culture in Harlem houses one of the most important collections of books and documents in the U.S., yet even many people who have visited don’t know about the founder and namesake. Three additional reasons for including this book are (1) author Carole Boston Weatherford has written and continues to write books that should be in every classroom. A recent favorite is her book about SNCC veteran Fannie Lou Hamer; (2) there are too few books about Afro-Latinos and also books that describe how schools denied/deny the central role of Black history; and (3) most children’s books refer to historic figures by their first name. I think this is a white- and northern-centric practice and is inappropriate, particularly when referring to African Americans who fought for so long to be referred to by their full and proper name. So, I appreciate the fact that this book is called “Schomburg” and not “Arturo.” (One of these days I will write an article on the topic, advocating that authors and publishers should change that norm. For example, elders I know refer to Mrs. Fannie Lou Hamer or Mr. Amzie Moore – not Fannie nor Amzie, even though they knew them personally. Children do not need to be on a first name basis to connect with someone in history.)

Tea Cakes for Tosh by Kelly Starling Lyons, illustrated by E.B. Lewis. Tosh, a young African American boy, learns from his grandmother how to make teacakes, a family recipe passed down from his great-great-great-great-grandmother. His grandmother says, “Long ago, before you and I were born, our people were enslaved.” She explains that at that time, even though his relative baked these cookies, she could not feed them to her own children and that on some days she would risk punishment to make and hide

extra biscuits to give them. This is one of the few books I have seen for young children that describes both the oppression and resistance of slavery that is not about the Underground Railroad and that is set, appropriately for young children, in present time looking back. It is also a part of a larger story in present time about the relationship between a child and his grandmother who is losing her memory. Two additional reasons for including this book are (1) author Kelly Starling Lyons continually writes invaluable, wonderful titles. Her most recent books are about “Lift Every Voice and Sing” and about architect Philip Freelon and (2) Tea Cakes of Tosh is out of print. All too often the high quality books go out or print while countless new, mediocre titles are released. Tea Cakes for Tosh fills a gap in children’s literature and should be re-issued.

Someday Is Now: Clara Luper and the 1958 Oklahoma City Sit-Ins by Olugbemisola

Rhuday-Perkovich and illustrated by Jade Johnson. Every year in the Zinn Education Project “this day in history” series, we feature the story of high school history teacher Clara Luper and the NAACP Youth Council in Oklahoma who began sit-ins to desegregate lunch counters at the Katz Drugstore on Aug. 19, 1958. This was two years before the more famous 1960 sit-in at Woolworths that sparked a national movement. I am so glad that Olugbemisola Rhuday-Perkovich wrote this children’s book about her to show young readers that people resisted throughout history – the more famous actions are seldom the first. In addition, teachers and students have always played an active role, yet seldom get the limelight. As with the titles above, check out other books by Olugbemisola Rhuday-Perkovich.

Milo’s Museum by Zetta Elliott, illustrated by Purple Wong. Milo’s class goes on a field trip to a museum where Milo learns about the roles of curators and docents, but learns

nothing about her own community’s heritage, which is missing from the exhibits. Inspired by the suggestion of her aunt, she sets out to create her own museum with objects that illustrate her family’s history. As curator and docent, she reclaims and honors that history. I love this book because it helps young people develop the skills to look at museum exhibits (and other public media) critically and to take action. It is also one of the few books I have seen about a young activist that shows her learning from her family – rather than taking action despite them. Even better than my recommendation, watch this two minute video clip of Professor Hasan Jeffries talking about reading the book with his daughter. Finally, I am a fan of all of Zetta Elliott’s books. 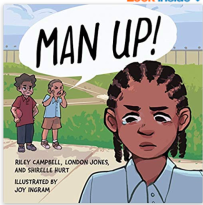 Dedicated to “all the boys who are told they can’t be themselves” – this is the book we have been waiting for. Not since William’s Doll have I seen a book that helps young readers consider that it is natural for boys to have and express emotions, sensitivity, and empathy. The protagonist, Aaron, gets teased by his friends and told to “man up” by his dad whenever he expresses sadness or sympathy. Thankfully his brother (Sage) returns from college and clarifies that it is unhealthy to bottle up one’s feelings. The authors of this book are three high school students in D.C. It is published by Shout Mouse Press, the source of many excellent children’s books by D.C. students.

Greenfield opens her latest title with a note to readers, “I want to take you back only as far as the Africa of a few hundred years ago. That’s when millions of Africans were forced from their homelands, brought to America, and enslaved. Some of the enslaved were midwives.” This unique picture book begins with historic background on the work of midwives, written in prose that is accessible to young readers and accompanied by archival photographs. The book then switches to poetry and stunningly beautiful illustrations — with vignettes from the lives of midwives during slavery, emancipation, and today. Greenfield closes with a poem about the midwife who “caught” her when she was born, Miss Rovenia Mayo of Parmele, North Carolina. Ms. Greenfield continues to innovate – placing the history at the beginning rather than the typical author’s note at the end. And it is a history that highlights the role of African American women and of knowledge that has been devalued by the corporate medical establishment. In these times when maternal mortality is high for African American women, this book shows the historic roots of this crisis and where to find the remedies. It goes without saying that Eloise Greenfield is one of the most important children’s book authors of the 20th and now 21st century.

Menkart received a B.A. in Human Services and a master’s in curriculum and instruction from George Washington University. The current focus of her work includes supporting teachers in the DC metro area where she is based through the DC Area Educators for Social Justice, updating the booklists at Social Justice Books, co-coordinating the Zinn Education Project campaigns to Teach Climate Justice and to commemorate the 150th anniversary of the 15th Amendment, and working to release updated editions of Putting the Movement Back into Civil Rights Teaching and Caribbean Connections: Puerto Rico.