Stephanie Parsley Ledyard is from Texas. Her first book, Pie is for Sharing was a Kirkus Best Picture book of 2018. It was illustrated by Jason Chin. Home is a Window, illustrated by Chris Sasaki, is her second picture book. Sasaki’s website describes him as “an animation art director and illustrator living in Oakland, California.”

I do not know the identities of either the author or illustrator of Home Is A Window, I’m not even sure of the identity of all the characters in this book. The father and children appear to be of African descent, while the mother is either white or a light skin person of color. ‘Mother’ and ‘father’ are roles I’m assuming because relationships are not stated, leaving this story of creating home open to some interpretation.

What’s most apparent in trying to racially identify the characters is their noses. The mother has a very straight, pointy nose. In fact, profiles of the family on the inside flap all have pointed noses.

That changes in the book. The dark skin characters have different shaped noses.

And heads. Here, the young boy’s head is quite elongated. Everyone seems to have large ears!

Here’s another profile image of the young boy’s head. The shape of his ears has changed, and his chin and nose have, too. Rather than wearing glasses, there’s this mask like shading around his eyes. Dad has a rather wide nose, doesn’t he? There’s nothing pointy about that nose!

Yet, the boy’s appearance is very similar to the dad’s. The lower third of their faces protrudes and is elongated and they’re both dark brown with deeper brown coloring around their eyes. 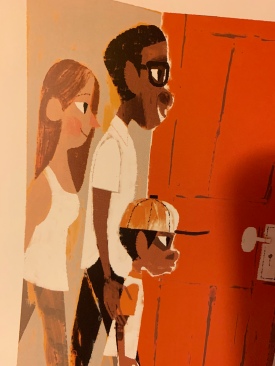 Do they even look human?

Kirkus, the publication that recently spoke out against the presence of anthropomorphic monkeys in picture books gave this one a positive review. Both School Library Journal and Horn Book gave it a star. I feel as if we’ve read completely different books. Thanks to librarian, Sujei Lugo for mentioning this book to me. She said the images made her “uncomfortable”. They make me uncomfortable, too.

Home is A Window was published by Neal Porter Books/Holiday House.

One thought on “a brief look at HOME IS A WINDOW”