Nadia stands at the center of attention in her parents’ elegant dining room. This is 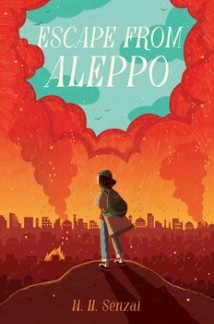 the best day of my life, she thinks. Everyone is about to sing “Happy Birthday,” when her uncle calls from the living room, “Baba, brothers, you need to see this.” Reluctantly, she follows her family into the other room. On TV, a reporter stands near an overturned vegetable cart on a dusty street. Beside it is a mound of smoldering ashes. The reporter explains that a vegetable vendor in the city of Tunis burned himself alive, protesting corrupt government officials who have been harassing his business. Nadia frowns.

It is December 17, 2010: Nadia’s twelfth birthday and the beginning of the Arab Spring. Soon anti-government protests erupt across the Middle East and, one by one, countries are thrown into turmoil. As civil war flares in Syria and bombs fall across Nadia’s home city of Aleppo, her family decides to flee to safety. Inspired by current events, this novel sheds light on the complicated situation in Syria that has led to an international refugee crisis, and tells the story of one girl’s journey to safety.

Escape from Aleppo is Naheed Hasnat Senzai’s most recent book. I’ve been working on an interview with her since it was released in January, but she’s been pretty busy! We were finally able to get it done and I hope this little interview leaves you looking forward to reading her work! I sure am!

ec: I haven’t had the opportunity to read Escape from Aleppo yet, but I know I’ll be reading it soon. What should I pay attention to in the book?

nhs: I hope that Nadia’s story allows you to walk in the shoes of a child whose life has been turned upside down by the trauma of war and the loss of everything she knows and loves. Although her story takes place in a “faraway” place, Syria, with different customs, religious practices, food and language, Nadia is more like us than we think – she loves hanging out with friends, watching Arab Idol, begrudging Algebra and has great hopes and dreams – at the end of the day my greatest wish is that my readers see how we all share a common humanity, no matter where they are from.

ec: How did others encourage you when you first thought that writing would be your career?

nhs: My earliest supporters were my school librarians, Mrs. Murray and Mrs. Hackworth, who handed me an amazing array of books, both fiction and non-fiction. It was while reading that I was inspired to create stories of my own. In the seventh grade my language arts teacher, Mrs. Cochran, started a novel writing club where a dozen or so my classmates attempted to write our first book. As I moved onto high-school and college, time for writing waned. But as I entered my thirties, I had an epiphany – I didn’t want to wake up at eighty and wish I’d written a book. Once the decision was made, it was my husband who pushed me to complete my first book by constantly asking – “Are you done yet?”

ec: You wrote your first books, Shooting Kabul, before public conversations began around #ownvoices. Did you have greater concerns over writing about Aleppo, Syria and telling the story of another country?

nhs: I wrote my first book, SHOOTING KABUL in 2009, long before the #ownvoices movement. It was written from the perspective of an Afghan boy, Fadi, and although I’m 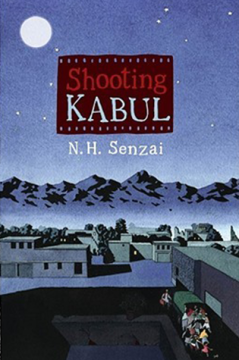 not from Afghanistan, I felt I could do the story justice because my husband is Afghan and my roots lie in neighboring Pakistan. Both countries share a similar culture, customs and religion, Islam. However, even though I was well connected to the Afghan community I still did a great deal of research in order to make sure Fadi’s story was as authentic as possible. At the end of the day I knew I had to write SHOOTING KABUL because there were few books with protagonists from this region of the world, and the ones that sat on bookshelves were written by outsiders, many who had superficial knowledge about the culture, religions and norms of the people who lived there. Fast forward eight years and I had the inspiration to write ESCAPE FROM ALEPPO. Neither a Syrian nor an Arab, I debated if I should attempt a story from that point of view. In the end I felt comfortable doing so because I’d lived in the Middle East for over fifteen years and had many friends in the region. Once again, my husband was a great help since he is a professor of Middle East Politics and was a tremendous resource to understanding the history and politics of the region. I made contacts with journalists based in the region and spoke with Syrian friends and contacts to make sure I understood the nuances of the culture, language and customs. Once I had a draft of the novel I had Syrian readers review it to make sure I was not missing or misrepresenting things, though I’m sure I’ve made mistakes!

ec: You write about refugees, wars and distant lands that most young people haven’t experienced. You intentionally write about heavy issues. Sure, you could choose to write about lighter topics that could convey similar messages, but you choose to take readers on challenging journeys across borders. I’m curious, what responsibilities do you think writers have to their readers? How do you decide what you’ll write about?

nhs: Writers have the responsibility of telling their readers the truth, no matter how difficult. Of course, you need to take into account the age of your audience and not be gratuitous in describing war and violence, but I don’t believe you should sugar coat it either. With the advent of social media and around the clock news, kids are surrounded by “heavy issues”. At the end of the day I believe they have the ability to weigh and analyze serious topics and have and come up with their own conclusions – they just need to be given the facts in the right context. With a husband who teaches political science and having been lucky to have lived around the world, I feel it’s my responsibility to bring to light stories from underrepresented voices and locations. And no matter how different these characters may appear at first, my hope is that my readers connect with them and realize that people, no matter where the live, are intrinsically the same; they have similar hopes, dreams and desire to live a peaceful, meaningful life.

nhs: When I get an idea for a book, my primary goal is to make it the best story possible, and when dealing with middle schoolers, you need to hook them in quick and keep their attention! The fact that my characters are Muslim is secondary, though still important, because that is where they draw their identity and values. I don’t’ find it difficult to write about faith, in particular Islam, however the challenge comes from having the responsibility to show that Muslims are not illustrative of the stereotypes that dominate the standard narrative. In the West, Islam is constantly portrayed as a violent religion that promotes terrorism, denies human rights and oppresses women. Islamophobia rose drastically after 9/11 and has worsened since the election of President Trump, with his “Muslim Ban” and rhetoric against Islam. This has particularly affected children, as bullying against Muslim children has skyrocketed. According the latest PEW study, Muslims make up around one percent of the US population and there is little opportunity to meet and befriend someone from the Muslim faith. This reduces the chance of connecting, developing friendships and engendering empathy. So, by writing about Muslim characters I hope that readers can connect with them through the pages of books and build bridges of understanding and kinship, versus erecting walls.

ec: What do you most enjoy about writing for 8-12 year olds?

nhs: I love writing for 8-12 year olds because at this age kids they can still suspend belief and journey with you through a story as long as you create believable plots, authentic characters, and dialogue that rings true. They truly are sophisticated readers and can handle heavy topics, so if we present complex material in the right context, we can open their hearts and minds to the world around them.

ec: When I read, I envision myself cuddled in a comfortable spot with a nice, warm drink and a snack. What would I need to eat and drink to fully appreciate Escape From Aleppo?

nhs: Syrian food is fantastic, many would argue some of the best in the Middle East! You should have a cup of Qahwah (Arabic coffee with cardamom) and enjoy Borak (filo pastries stuffed with cheese), Kibbeh (bulguar balls stuffed with ground lamb and spices), Hummus (chickpea dip) with pita bread, Yalanji (stuffed grape leaves), and for desert Halawet el Jibn(Cheese filled with cream drenched in rose scented syrup) or Maamoul (cookies stuffed with nuts or dates). Now I’m hungry and need to find something to eat…

ec: That does sound a bit delicious! What are you looking forward to in 2018?

nhs: Despite all the trauma of 2017, whether political, economic, social or via mother nature, I have been humbled by watching good people rise up to take a stand against what is wrong. I hope 2018 brings more people to their feet, fighting for human rights, political representation and climate change initiatives, while condemning racism, sexism, homophobia, Islamophobia and other ‘isms and ‘phobias. 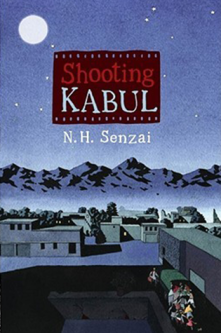 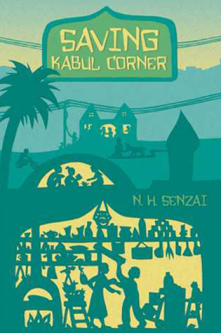 I grew up speaking two languages, balancing life lived on the edge of two cultures, and, happily, two cuisines—tandoori chicken and hot dogs, grilled side by side on the 4th of July.  I got on a plane for the first time at two months, in Chicago, IL, where I was born, and have been travelling ever since. I grew up in San Francisco, Jubail, Saudi Arabia, and attended boarding school in London, England where I was voted “most likely to lead a literary revolution” due to my ability to get away with reading comic books in class. I’ve hiked across the Alps, road-tripped through Mexico, swum with barracudas in the Red Sea, taken a train across the Soviet Union, floated down the Nile, eaten gumbo in New Orleans and sat in contemplation at the Taj Mahal. Somewhere along the way I attended UC Berkeley and Columbia University, while pursuing my passion for writing. I’ve landed back home in San Francisco where I live with my husband, a professor of political science, my son, and a cat who owns us.