Sujei Lugo wants to change the face of children’s literature and she has the energy, spirit and knowledge to do just that. She’s a public librarian who has worked in libraries in Boston and Puerto Rico. She’s a member of REFORMA, the Association of Library Service to Children, the 2018 Newbery Award selection committee and former editor of the Litwin Books/Library Juice Press series Critical Race Studies and Multiculturalism in LIS. Sujei is on Twitter [@sujeilugo] and she blogs as part of the team at Latinxs in Kid Lit. She’s also the creator of our website and downloadable pdf.

Sujei, when did you know you wanted to be a librarian?

In 2001 I started working at the Puerto Rican Studies Collection at the University of Puerto Rico, while studying. Originally I was planning to attend medical school but I was not too happy with those plans. The library director during this period basically became my mentor and encouraged me and showed me how librarianship as a profession was something I could pursue. I started my MLS and took several school librarianship courses, I then got a job at the University of Puerto Rico Elementary Laboratory School where I got immersed in Latin American children’s books, the intersection of social themes in children’s books and how they could be used in the classroom. That’s when I knew I wanted to continue working with children and work as a children’s librarian.

What do you think is seriously lacking in children’s literature right now?

There’s a gap in children’s plays and theatre. I would like to see more collaboration between native/poc authors and native/poc illustrators for picture books. We also need easy readers/early readers with more human characters, mainly native/poc. There’s not only a huge gap in middle grade queer novels, but qtpoc middle grade novels too.

When you’re reading, are you more likely to be eating or listening to music? What would you be eating/listening to? 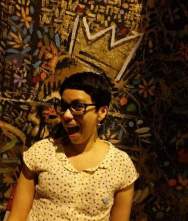 I can’t listen to music with lyrics while reading, but I do listen to jazz or tv/film scores. Eating? I do love eating but it will depend on the time of the year, time of the day or a particular craving.  For example, last week I had an ice cream sandwich while reading some books for my Newbery duties but two days ago I tried some apple with peanut butter. But a good glass of bourbon or beer is always great.

How would you suggest librarians use the We the People Summer Reading List?

As a children’s librarian at a public library, I encourage fellow youth librarians to promote the list among teachers and educators, parents and caregivers, education and LIS students, as well as anyone interested in children’s literature. It is useful to print the list and make it accessible in your library and have it along your other summer reading programs promo. They can also prepare a display at the library with books from the list. Sometimes when people come with their own list to get their summer reading books, it’s nice to also show them this list so they can see more options. In my experience, when given the choice, people are ready to give new things a try so it is up to us to show them they are options available. Don’t hesitate, show them and let them know they can find more books with more real representation of how life really is.