If you haven’t seen the reading list #Lemonade for Girls: In Formation over on Zetta Elliott’s blog, you might want to. She, Sarah Dahlen Park and myself collaborated to create this empowering resource.

Our selections reflect some of the themes in Beyoncé’s visual album: self-love, African roots, spirituality, Louisiana, the history and culture(s) of the South, Black women’s activism, police brutality, and “Daddy Lessons.”

Saturday, I joined a group of teachers and librarians to travel to BookCon in Chicago. High school librarian Kathy Hicks-Brooks usually arranges planes or busses to take a group of her teachers to BEA but this year, the event was pre-empted by ISTEP testing. Instead, she took a group to BookCon. I met a few authors in real life that I’ve connected with on social media and attended a few panel presentations. While this is a good event for the general public, for someone who is use to NCTE and ALA, the exhibit itself was lacking.

The panels were quite good, particularly the first panel I sat in on, “We Need Diverse Books Love and Loss in Children’s Literature”. The well-attended panel was moderated by the ever so charming Dhonielle Clayton who steered authors Jenny Han, Gene Luen Yang, Francisco X. Stork, Anna-Marie McLemore, Sherman Alexie and Leigh Bardugo to an intense discussion on both love and loss. I’m going to try to recap with a few quotes and outtakes.

Leigh spoke about writing Crooked Kingdom to provide visibility to disabled people. Regardless of her own disability, she sees herself as bad ass and created a bad ass character to made that part of her visible. She felt writers could scaffold their work to prepare students for a particular idea so that it would become possible to push readers and their visions as far as possible.

Anna-Marie reflecting on her first love at age 17. “Loving made it necessary to lay down identities sooner.” She holds that certains aspects of our communities, such as ethnic or gender identity, come into what we write. Growing up as a child, her Latina grandmother told her “If you’re a good girl, you can get a blue-eyed boy”, reinforcing the thought that if you can date someone from the dominant culture then you’ve made it. You’ve been accepted. “The world has told marginalized characters that they don’t deserve happy endings.”

Francisco: “A hopeful ending isn’t necessarily a happy ending. We want to leave endings with the feeling that there is meaning out there.”

Jenny Han added to these thoughts by explaining how good it felt to see women of color in Scandal that everyone desires. She then vicariously felt she, too could be wanted.

Gene commented that while Eleanor and Park was criticized for objectifying Park, he took great pleasure in seeing an Asian male being objectified. It was a very funny moment. Gene has quite a sense of humor.

Sherman Alexie’s first date was to see Purple Rain “in an era when you didn’t know things”. Neither he nor his date knew anything about the movie they were planning to see. In a larger context, he felt that “the pressure for us to be representative was adopted in a way that isn’t natural for us. Why can’t I just write a story and just let it be about Purple Rain?” His date was a white girl and the date was about more than just the two of them, what we do outside our communities affects us and our communities.

“As Native Americans when we write about sadness our own view represents everyone [who is Native.] Even other Natives view it that way. When my books are criticized, non-Natives will read my books for the pain. I’ve learned we’re all in the range of fucked-up-ness as individuals and in our tribes. I’m not interested in whether or not my people want me to write a happy ending.”

Francisco Stork: “It’s an amazing thing when you’re 16 to have someone say ‘yes’ to you.” (on getting that first date)

“There are moments in relationships, in love, in rejection that you see yourself through the eyes of another person”, like when your crush tells you they cannot go out with you because you’re Latino.

Francisco builds friendships as the basis true love in his writings.

Gene: His 7th grade friend told him that if he kept reading comics books, he’d never get a girlfriend.

Sherman: “It’s dangerous to be an individual with in a tribe. If you reach across boundaries, it becomes dangerous for everyone.”

Question to the panel: Do we hide the dirty laundry?

Gene: “You have to go where you’re uncomfortable.”

Francisco finds it difficult to write about snobby Latinxs who think they’ve made it, but it’s important for him to write that so that readers don’t think all Mexicans are poor.

Sherman: “Our literature gets condescended upon by our own people. They don’t expect us to write for greatness. I want to write War and Peace.” Thunder Boy Jr. (his latest picture book) was inspired at his father’s funeral when he realized there was a tombstone with his own name on it because he and his father had the same name. “If there’s only one book on Native Americans, then that book is asked to do many things. We need more books with characters of color so they can do everything.”

Jenny agreed, saying she cannot write everyone’s story. “I can only do what I’m good at.”

Leigh urged attendees to look for a book with a format or cover that’s “not like you. Buy it. Read it.”

There was a question from the audience asking the panel members what they’re doing to promote diversity. I felt a slight pause, perhaps coming from some of us wondering how this person has missed all the work that has been and is being done.

Francisco replied by reminding us we all have to find what works for us. He mentors young writers.

Sherman asked everyone to realize how much progress has been made and remember to respect the diversity within our own communities.

I liked that in this small community of authors, the sense of diversity came from the honest and complex perspectives they provided both in how they live their lives and how they write for young people. No doubt these perspectives have been tempered from the cultures in which they live, but these diversities created a rich dialog. Imagine how good their books are.

Jenny Han: To All the Boys I’ve Loved Before: P.S. I Still Love You

Anna-Marie McLemore The Weight of Feathers

I had photos to add to this post, but something is going on with WordPress and I can neither reduce the size of the photos or re-position them. I’ll just post a couple here for now. The first is the above mentioned panel and the second pic is friends and colleagues who are teachers and librarians in Indianapolis that went to BookCon. 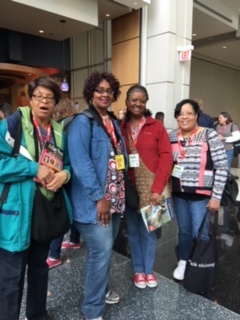