I recently posted the CCBC’s recent figures on diverse books, stepped back and watched the web. Some praised the numbers for gains. KT Horning cautioned the numbers easily go up from year to year. Some questioned the books written by ethnic minorities but not about ethnic minorities. How is that call made? Is it good or bad to see this phenomena? Is this a reflection of author’s choice or publishers pigeonholing?

The CCBC numbers can easily be manipulated. While comparing my list of young adult books by Native and POC authors to that of the CCBC, I realized that the CCBC’s numbers are dependent upon what publishers decide to send them and as a result, I have several books not on the CCBC’s list. With my numbers, I can only indicate an increase in the number of YA books released and cannot do a comparative analysis because I don’t know the overall number of YA books released. Perhaps

if more of us collect the numbers, and reflect on the numbers in various ways, we will remind people of the injustice that is being done to children. Debbie Reese is asking for assistance with collecting Native American titles. The CCBC is doing important work by supplying us with data to verify the growth, or lack there of, in books written by and about Native Americans and people of color. The more data that we create, the better our argument becomes.

Here in America, the dollar vote is what really matters. I’ve started watching Publisher Weekly’s listing of top selling children’s books and the number of first run books printed for new titles. I also watch for paperback releases, booktrailers, ebooks and audiobooks because they have a huge impact on the bottom line. Do books by authors of color have reading or teaching guides? Are they included in book fairs? Blog tours? It’s not just publishing the book that we need, but there needs to be work getting them to sell them. Elizabeth Bluemle writing at ShelfTalker recently commented that saying diverse books don’t sell is a meaningless statement because there are also books by white authors that don’t sell. I think she’s missing the real problem.

the majority of authors of color. I don’t know how one gets to be an A List author but I do know that more time, money and energy goes to these authors.

At ALA recently, an author of color was told her books were not on display because no one was asking for them, that displays contained books that everyone wanted. Sujei writes about similar experiences. I find that logic so contrary to what would promote sales. Why not have a plan to place similar titles together or at the very least place those in high demand next to those in low demand? How will you increase the demand for books no one knows about?

Again at ALA Midwinter, there were numerous instances of publishers only having one ARC of books by authors of color. There were no posters, postcards or booksmarks for these books either.

Has anyone ever consider an action that would create more A-List authors of color? If an author is good enough to have a book published, their work should merit the attention it takes to get it sold. While I’m speaking of creating a more level playing field for authors of color, surely you can see there is a greater problem in the way publishing continues to do business. As technology continues to change the way we maneuver the world around us, no industry can continue to do business as usual. Taxi cabs, satellite TV providers, realtors and even travel agents have realized this. 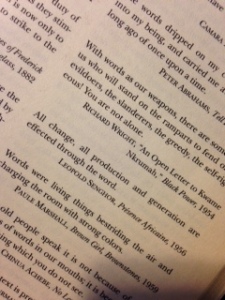 Self publishing is becoming more and more legit. Libraries that once shunned self pubs are now working with their community members to create, print and catalog them! They will slowly and surely eat into profit margins if they’re the ones publishing what people want to read bet can’t find elsewhere.

Recently, I was sharing information about the classroom I adopted and I prefaced the idea by saying something like ‘I’m just a blogger and felt like I wasn’t doing anything’ and in that statement, I completely forgot the power of words, the strength of the story. There are reasons why others want to tell our stories. Go back to the CCBC numbers and look at the increasing rate of our stories being told by others. Words are the ultimate power.