I had the pleasure of meeting Laurianne (Laur) Uy at ALA a few weeks ago. She is such a charming young lady and so obviously talented that I invited her for an interview. Not only did she agree, but she also signed a copy of Polterguys Vol. 1 that I’ll be giving away in a drawing on 10 August. To enter, leave a comment below that states you’d like to win the book by midnight, 9 August. I will mail international. 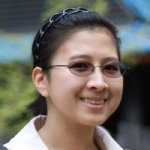 Where did you grow up?

I grew up in the city of Manila, Philippines. In 1992, I was in second grade when my family moved into a unit on the 11th floor of a condominium. This was because the condo would be closer to our school which means we didn’t have to spend hours and hours commuting in traffic. Even then, we still had to be up by 5:30 AM to make it to our 8 AM classes. I guess my siblings and I were slow movers in the morning! But I remember we had a really nice view of the city from our balcony windows.

So, When did you move to the US?

I moved to the U.S. in July of 2002, right after I graduated high school in the Philippines.

Do you have any pets?

I don’t! Unfortunately, I’m allergic to pet hair which is awful because I adore cats! It’s so bad I’m subscribed to a few cat channels on youtube to get my kitty fix. And although I jump at any chance I can get just to be near cats, I always make sure to load up on Benadryl before I meet them.

What do you enjoy watching on television?

I love well-written animated series, cable drama and a few sitcoms here and there. I like shows that have compelling characters that evolve and have stories that can move me. If it’s capable of making me cry in some way, I’m almost positive it will be a favorite.

Actually, Nathan and I went semi-vegan for a while just to see how much meat we could eliminate from our diet. I was really surprised how much I got into it considering I grew up with very meat-heavy dishes. For the most part, we just cook vegetables and have them with rice at home (I’m Filipino-Chinese and this is a staple!) but eat whatever we like when we eat out.

Are there any books that stand out in your memory from your childhood?

Nancy Drew was a big deal for me because it’s the first series I ever collected. I guess you can say I’m really fond of young female detectives solving mysteries! I love that Nancy’s dad was supportive of her escapades and that she dragged her friends into cases, too. I only bought and read up to the 20th book and I don’t think any of the bookstores carried the numbers beyond that.

What book(s) are you in the middle of reading right now?

Oh man, I always come out of the library with a huge haul so it’s a mix of things. I’m reading a bunch of long manga series like Bakuman, Yakitate Japan and Sailormoon. I also listen to audiobooks at work so I’ve been picking up young adult, fantasy/sci-fi and non-fiction books. I recently completed the Scott Westerfeld’s Leviathan trilogy and Stephen King’s Under the Dome and really enjoyed both.

When did you first realize that you’re an artist?

Maybe it was the fact that I doodled little stick figures all over my piano books instead of practiced with them. I had no idea what sketchbooks were and just found the gutters between columns on newspapers as interesting settings for my stick figure characters. There were a lot of tall cliffs!

Who was the first character that you created?

I don’t really remember! I’m sure it was some stick-figure princess in a little cone hat with some cloth on top but the first set of characters I designed when I started making comics was definitely my high school friends. I wanted us to hang out with our favorite anime characters so I started making comics that chronicled our adventures together.

Tell us about Polterguys! What inspired the book?

Polterguys is the story of a nerdy college girl who ends up moving into a house that’s haunted by five cute ghost guys. Since she’s

the only one who can see them, she has to help them resolve their unfinished business.

There are a ton of influences in this book and the first is of course, reverse harem manga like Ouran High School Host Club and Fruits Basket. Girl-centric TV shows that had great female leads like Buffy and Veronica Mars showcase the kind of writing I aspire to. Finally, I also grew up on a lot of fun 90s ghost movies like Heart and Souls and The Frighteners. They’re both great character-driven supernatural stories and anytime they’re on TV, I’m just compelled to watch them because the stories just suck you in.

What happens to Bree in the first volume?

Bree moves out of her dorm room because she has issues with her roommate and finds a nice place to rent off-campus. It turns out to be populated by ghosts who really just want to be friends with her because she can see them. She ends up becoming responsible for them because they get in trouble with a Reaper, a being who essentially takes ghosts away to move on to great beyond.

What are some of the future adventures that you have planned for her?

I don’t want to get too spoilery but I’d really like her to struggle with relationships with living people this time!

You’re such a visual person, I wonder what kind of experience school was for you. Was it a real struggle to get through reading text and writing answers? Was school interesting to you?

School was good for me. I suspect I was having more fun actually learning than my peers because I didn’t complain as much! I also remember the curriculum as really encouraging creativity and that was definitely something I responded to. We would have art projects for science, english, history and I remember drawing all the time. So, while I never got around to proper art lessons, I got a lot of practice on academic hours.

The only issues I ever ran into were my Chinese classes because I barely understood the teacher and didn’t speak the language at home or with my friends. To this day, I still get nightmares about pop quizzes in Chinese – it’s definitely left some deep psychological scars in me.

What’s challenging you most in drawing these days?

I’d say perspective and backgrounds. I want to be the kind of comic artist that masters fundamentals so I can tell immersive stories and have my characters be in believable settings and environments.

If you could visit any museum in the world, which would it be and why?

I’m going to be boring and say the Louvre because I haven’t been to Europe yet despite having majored in Art History. I just know seeing work I’ve studied for semesters in person is going to blow my mind.

Thank you so much, Laur!