Like many writers from the Asian diaspora, Zanib Mian lives in London where she first published Planet Omar in her own independent publishing company. The book, then titled The Muslims won the Little Rebels Award. She is known for her passion about representation in children’s publishing.

Nasaya Mafaridik is based in Indonesia. She is a 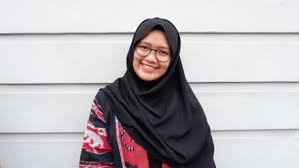 self-taught artist. Nasaya can be found on Instagram: @a.nasaya

Danielle Jones is a youth and teen librarian in Portland, Oregon. She believes that antiracist work should and can start at a young age, and loves using books to help facilitate that work. She has had the privilege to serve on the 2018 Robert F. Sibert Award, and the 2019 Micheal L. Printz Award, and reviews for Kirkus and School Library Journal. She can be found sporadically on twitter @daniellebookery.